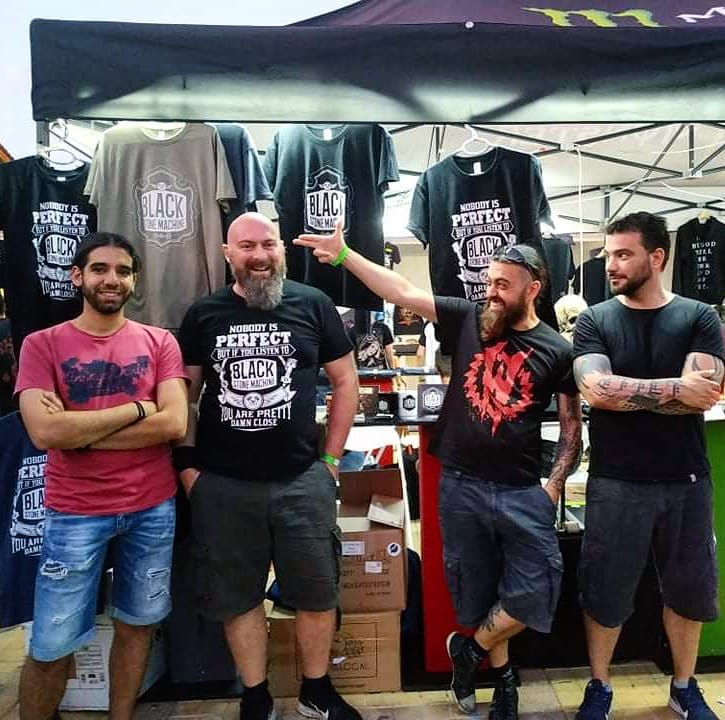 Black Stone Machine is a Greek band formed in April of 2019 from Alex (Guitar/Vocals), Nick (Drums) , George (Guitars/Backing Vocals) and Mike (Bass).
Their first EP titled “Black Stone Machine” was recorded in less than a month at Feedback Studios containing two songs: “Bounty Hunter” & “Black Stone Machine” and was released on June 16. The artwork is from Bewildbrother (1000 Mods, Planet Of Zeus, etc)
Black Stone Machine is a perfect mix between Heavy Rock – Metal and the melody of Blues Country Rock.
Their first live performance took place in Berlin followed by a mini Greek Tour.
In November of the same year recordings for the first album begun and after five long months the band’s first album titled “Crossroads” was completed.
Twelve new songs with guests from great Greek bands like: Nightstalker, Dentrites and Rusty Bonez are ready.
The First Single titled “House Of Lies” was released 29th of June with two songs “House Of Lies” & “Rising Tide”.
The band’s album was released from “Ikaros Records” on September 25th.
Meanwhile the song “House Of Lies” is in the “ Unity vol 1 – In Solidarity With The Refugees of Moria Camp” collection with bands like: 1000Mods, Villagers Of Ioannina City etc.
In April of 2021 Black Stone Machine record Black Sabbath‘s “The Wizard” for a Tribute Album By Antichrist Magazine along with 45 bands from all over the world.
In June of the same year “ One With The Horde” EP was recorded along with Babis Papanikolaou (Planet Of Zeus) and Vaggelis Karzis (Full House B.C. , Wolfheart, Ex-Rotting Christ) taking over vocal duties for the song Rickenbastard 4004. It was released in 10 Sep 2021